Whilst it may seem far fetched to think of beer as a natural menopause treatment, there is actually credible scientific research to support it. The key feature of beer in relation to menopause is the presence of phytoestrogens.

Phytoestrogens are estrogen-like plant compounds that are also in alternative menopause treatments like soy. They work by binding to estrogen receptors, and so provide a mild estrogenic effect on the body. Phytoestrogens are not as strong as regular estrogen, but as estrogen levels decline in menopausal women, this boost of estrogen has a balancing effect on the body. Supplementing with phytoestrogens in soy and hops (which is made into beer, but can be purchased as a supplement), can alleviate hot flushes and improve the general quality of life for women during menopause. 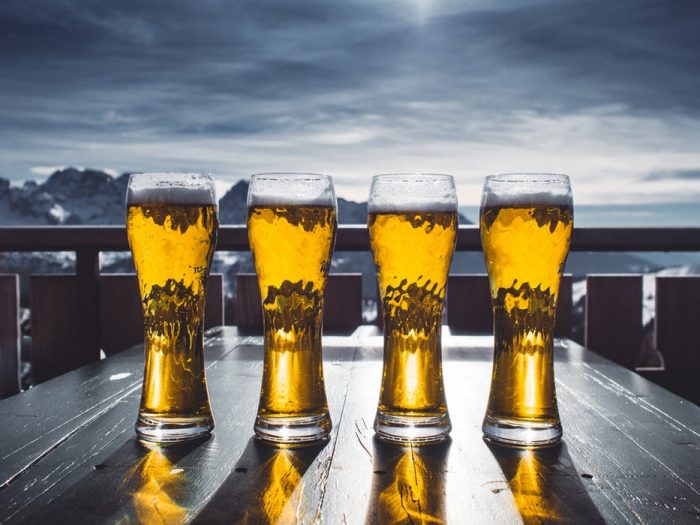 Hops has more typically been used by herbalists for its mild sedative effect. It’s great for sleeping problems, and also for nervous gastrointestinal and stomach problems. It is stimulating to the stomach, and has been used for anorexia, irritable bowel disease, inflammatory bowel disease, dysmenorrhoea and amenorrhoea.

Hops has long been suspected of having an effect on the hormonal system. Before the advent of machine pickers, women and girls picked the plants at harvest, and would often spend 3 weeks doing so. It was observed amongst the young girls picking hops that their menstrual periods would come on early. But it wasn’t until hops was studied scientifically that this result was explained and validated. It turns out that hops contains very high levels of phytoestrogens – between 30,000 IU to 300,000 IU per 100 grams. The levels of phytoestrogens are highest when the plant is fresh.

The phytoestrogen in hops is called 8-prenylnaringenin (8PN), and is stronger than other estrogens studied so far. It is present in beer, but levels are low compared to levels in plant extracts.

8-prenylnaringenin (8PN) is a flavone. It has been found in the animal model to have milder but similar effects to estradiol. The hops flavone also had a stimulating effect on the uterus in this study (on animals). It has not been established if this effect is also present in women taking hops. If so, progestins, or natural progesterone, would need to be taken at the same time to prevent overstimulation of the endometrial tissue.

Czech scientists have developed this research by using a new technology to create a non-alcoholic beer that contains the same amounts of hops and malt as regular beer. No mention was made at this stage as to whether the menopause beer would have higher levels of phytoestrogens. The idea came about because the Czech Republic is a strong beer drinking nation, and menopausal women there had low levels of estrogen in their diet. The menopause beer is aimed at relieving the symptoms of menopause and improving bone density.

Scientists have also found hops to have an anti-inflammatory effect. Compounds in hops have an effect similar to regular pain killers like ibuprofen, but with less of a disturbing impact on the gastrointestinal system. These active constituents of hops work in the same way as the arthritis drugs vioxx and celebrex, in that they are COX-2 inhibitors.

Hops is also an antioxidant, it may reduce insulin resistance, and is being investigated for its potential anti tumor properties. Hops was found to inhibit the growth of breast cancer cells ‘in vitro’, or in the lab, paving the way for further studies to be done. Hops should not be taken by people with depression however, according to traditional herbalists.